People often ask how Edge4Vets came to be


Here's the answer: I was on a plane in 2010 when a young soldier sat down next to me. He was dressed in camouflage, as many soldiers are when they travel. This was at a time before there was much publicity about young soldiers dealing with PTSD, and I could see that this young man had troubles.

I could see also that his agitated state created a security issue for the flight crew, which needed to deal with the situation. What happened next was very sad, and after we took off I took out pen and pad and wrote an account of the incident. The NY Daily News ran the story on it's OP ED page on Memorial Day in 2010 as a "call to action" to help our troubled soldiers – and that spurred me to create my own call to action, which became the Edge4Vets program.

I created a resiliency institute at Fordham University in NY which takes resiliency lessons I learned profiling a group of 9/11 aviation heroes for a book, Reclaiming the Sky (view book), and puts the strengths-based lessons I learned into programs. After the incident with the soldier, as noted above, I made up my mind to answer my own call to action in the OP ED and I changed the focus of my institute to work on helping vets tap into their resiliency strengths from the military to get jobs.

In 2011, we introduced a workshop series (Resiliency) Edge4Vets, for a small group of vets at Fordham University. The workshops teach vets how to translate their strengths from the military into tools for civilian success. We started in NY with a group of Fordham vets and how have expanded to include vets throughout NYC. I'm pleased that many vets who've taking the workshops get jobs, as high as eight out of ten as our follow up surveys show. We continue to expand in NY, including offering a partnership now with City University of NY' to source the 3000 vets from CUNY's 24 schools into Edge4Vets.

With the leadership of Mike Dunford, formerly global head of Human Resources for Covidien (now Medtronic) in MA, we've expanded Edge4Vets into a Massachusetts state-wide program in partnership with more than a dozen companies. UMASS Lowell, Boston University, Suffolk University, and other universities participate on the schools side, along with the state's 15 community colleges.

Carnival Corporation brought Edge4Vets to Florida to work with Florida Atlantic University, Miami Dade College, Mission United, Miami Int'l Airport, the Greater Miami and the Beaches Hotel Association and other groups to prepare and connect vets to jobs in that state's cruise, aviation and hospitality industries, with more industries joining all the time.

The WalMart Foundation through Syracuse's Institute for Veterans and Military Families gave us a seed grant in 2014 to plan a module that could be offered at airports. We've started implementation on that program, Edge4Vets at Airports, in partnership with Airports Council Int'l- North America's HR Committee.

We're growing, but it all comes down to a soldier on a plane. What I worried most about was not so much what was going to happen to him that one day but what his "tomorrows" would hold if he did not get support. Edge4Vets could not help that soldier, which continues to trouble me, but hopefully we are making a contribution to other young men and women who have served our country so selflessly. 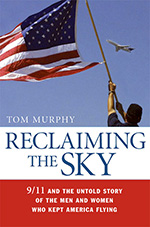 Learn also about "Reclaiming the Sky," the story by Tom Murphy of 9/11's aviation heroes who inspired the "resiliency" principles that inform the Edge4Vets curriculum. We’re conducting a "resiliency essay" competition in 2021 to give aviation workers, and students, a chance to tell how they can apply lessons they learn from 9/11’s aviation heroes to meet today’s challenges stemming from the covid crisis.

The essay competition will run throughout 2012 and culminate with recognition of the winners in September, 2021 as part of a tribute to the 20th anniversary of 9/11.